Wright’s Wilderness Camp, was originally built by Wilfred Wright in the early 1950’s on Gullrock Lake in Northwestern Ontario, Canada, five miles south of Red Lake.  Wilfred cleared the land and built several cabins before he sold it to the Retzky family who renamed it Gullrock Lake Camp.  The Retsky family operated the camp until 1980 when Mike and Gerry Weaver took over, renaming it Weaver’s Wilderness Camp. It operated as Weaver’s for twenty- three years before they sold it to it’s current owner Lee Wright, whose great uncle was the original owner, Wilfred Wright. The camp has operated since as Wright’s Wilderness Camp.

Lee Wright was born and raised in Red Lake, Ontario, where he spent much of his time in the outdoors.  His high school and college summers were spent working at another fishing camp in the area with many of those years employed as assistant manager.  Lee went on to complete the culinary program at Confederation College in Thunder Bay, but in the end realized that his real passion was in the fishing camp business.

Lee met Stephanie in the last year of high school, when he was sent out by his boss to look for some cute cabin cleaners to help out on the weekend change-over.  It didn’t take long before Stephanie noticed Lee’s handsome good looks and handy-man abilities and like a fairy tale, they fell in love.

Stephanie, a long time resident of Red Lake, also shares a passion for the outdoors.  Having graduated from Lakehead University in Thunder Bay, with an Honors Bachelor of Outdoor Recreation, Parks, and Tourism, Stephanie was more than prepared for a career in the outdoor tourism field.

In early 2007, Stephanie and Lee were blessed with a beautiful boy, Sullivan (Sully). Sullivan enjoys Minecraft, swimming, and fishing with his dad.

In 2009, Andie joined our family.  Andie adores her big brother and is rarely anywhere other than his side.  However, Andie is definitely ALL GIRL as she loves swimming, clothes and dressing up.

We look forward to watching them both grow-up, and are excited to share with them great experiences and beautiful memories here at the camp. We invite you to share a small piece of this experience by visiting us here at Wright’s Wilderness Camp. 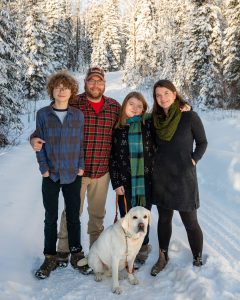 and check out the spectacular scenery & fishing at our camp.

to find out more about the packages we offer.

to find out more about available accommodations and amenities.